Our School
Home Our School History 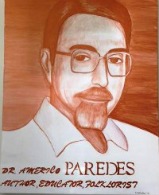 Américo Paredes Middle School opened in January, 2000, and is named after Dr. Americo Paredes, noted author, folklorist, educator, and namesake of the Américo Paredes Center for Cultural Studies at the University of Texas.

Paredes was born in Brownsville, Texas on September 3, 1915 at a time of great border tension and violence resulting from the 1910 Mexican Revolution. His father, Justo Paredes, came from a ranching family that had settled on both sides of the lower Rio Grande valley in the mid-1700s. His mother's family had come from Spain around 1850.  One of eight children, Paredes received his early education in the public schools of his native Brownsville, Texas. After school hours he worked at various jobs to help support the family. In the evenings during summer vacations he often listened to corridos, folk tales, and oral traditions recounted by border "Mexicanos" around the campfire.

Throughout his educational career he met with discrimination, an ongoing experience that led to his lifelong energetic fight against ethnic bias and discrimination.

Paredes received his post-secondary education at Brownsville Junior College and the University of Texas at Austin, where he went on to become an honored and respected humanities professor, receiving numerous honors from UT, the National Endowment for the Humanities, and the Mexican government.  He was the first director of the Center for Mexican American Studies at UT, a program for which he fought for many years. The University of Texas at Austin Américo Paredes Center for Cultural Studies is named for him.

Dr. Paredes died in May of 1999, after the announcement that the school would be named for him.  He attended the groundbreaking, but had passed away before the actual opening of the school.